Chemistry is
our Passion

The management of the solvadis
group and their subsidiaries

The Solvadis Group is moving inexorably towards climate neutrality. After the group determined its own company carbon footprint (according to DIN ISO 14064-1/GHG Protocol) in a detailed report last fall, several of the measures contained therein have already been successfully tackled or fully implemented just six months later. One highlight was a joint project with the company Planet Tree from Hanau. 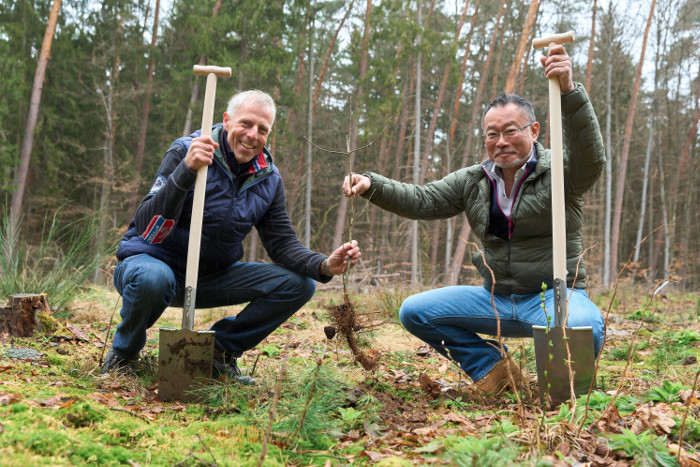 Active in the middle of the Hanau Forest: Solvadis-COO H. Ishita (right) and Dr. J. Oldendorf, Head of the Sustainability Department
Picture:solvadis

In the course of an officially approved measure, employees of both companies recently met for a joint planting campaign. In the nearby Hanau forest, ten pedunculate oak seedlings were symbolically planted, a tree variety that can better withstand the changed climatic conditions in the middle of Germany than the often very old spruce stands. In total, Solvadis will accompany this local reforestation measure with the planting of a total of 5,000 trees, thus binding almost 63 tons of carbon dioxide from the air each year. This already corresponds to almost 12 % of Solvadis' Scope 1 and 2 emissions.

But that is not all. The conversion of the office and own warehouse locations to 100 % green electricity was very consistently driven forward. With effect from July 1, 2022, almost 78 % of the electricity required by all sites will be successfully generated from renewable sources. The quota has already been over 60 % since mid-February this year. Not only the switch to regenerative sources away from the German electricity mix, but also the continuous replacement of electrical equipment (especially computers, monitors, printers, light strips) to even more economical models has been implemented for years and is an integral part of the company's policy. Speaking of replacement, some of the company's employees have already switched to economical hybrid vehicles when choosing a new company car - another step in the climate-neutral direction.

"Overall and from today's perspective, thanks to the great efforts and support of numerous Solvadis colleagues, it looks as if the Solvadis Group will be able to achieve its originally set goal quite a few years earlier," says the head of the department, Dr. Jens Oldendorf, "because in the past four years it has already been possible to save twice as much CO2 as would have been necessary according to the plan in order to meet the legal requirement of "climate neutrality by 2045"." According to Oldendorf, there is often room for improvement where Solvadis is dependent on the assistance or implementation of third parties. This relates above all to the mostly natural gas-powered heating systems at the office locations, which are operated by external property management companies.

An external energy consultant has recently been recruited for the Gernsheim site and will be presenting a broad-based concept for the use of renewable energies in the coming months. Particular importance is attached to the skilful interplay of energy recovery from waste heat processes and regenerative generation via solar modules. Both must be coordinated in such a way that the use of conventional types of energy can be minimized.

The independent rating agency EcoVadis evaluates companies from over 160 countries in the categories of environment, labor and human rights, ethics and sustainable procurement.

Together we make the forest strong for the future.

Since its launch in October 2020, Planet Tree has been supporting the reforestation of our local forests in official partnership with the state forests of Hesse and Mecklenburg-Western Pomerania. Many thousands of trees have been planted since then and with the support of private individuals and companies, more are being planted every day. Instead of monocultures, mixed forests are being promoted to give the forest strength and resistance to the dangers of the coming climate changes. Thus, pedunculate oaks, maples and silver firs are planted in the designated areas and carefully grown by the responsible forestry departments.

Together with Planet Tree, the solvadis group is thus making an active contribution to climate protection.

This year we have again organized an onboarding at the headquarters in Frankfurt am Main for the start of the training on 02.08.2021. After a joint round of introductions, the trainees received helpful information about the solvadis group in order to get to know their training company better.

Afterwards, our trainees were once again warmly welcomed on behalf of the management. Then a trainee from the 2nd year of training reported on his first year of training and shared his experiences with the new trainees. He was also able to give them helpful tips for a good start to their training. After a joint lunch and a feedback round, our trainees were given a tour of the company and then handed over to their training officers.

We wish our new trainees every success and much joy in their training!

November 2020: Own rail connection in Gernsheim

to the customer magazine

August 2020: Successful commencement of the new Sulphur Forming Facility and the new rail access in Antwerp